When building arguments, how can we make the most persuasive case for our position (say, for example, that the Lakers are the best franchise in the history of NBA basketball)? What specific elements directly impact persuasion? What separates authentic persuasive appeals from the inauthentic? 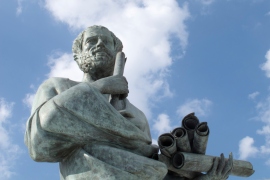 Rhetoric is the art of discourse aimed at persuasion. The noble use of rhetorical discourse is a powerful and valuable skill for individuals and society. In Christian efforts at evangelism and apologetics, the proper use of rhetoric can and should be utilized to convince people of the Bible’s truth. Unfortunately, too often people associate rhetoric with disingenuous attempts to sway them through slick manipulation—but abuse of rhetoric shouldn’t keep us from appreciating its proper use.

Let’s highlight three basic principles that have come to be accepted as legitimate tools of persuasion. While these broad principles were first systematized by a preChristian philosopher the modes of persuasion themselves are even evidenced in Scripture.

Aristotle (384–322 BC) was one of the world’s most influential philosophers. His profound ideas deeply influenced many areas of human thought. He wrote what many consider to be the greatest work concerning persuasion in his Treatise on Rhetoric. Aristotle describes three modes of persuasion revealed in three key Greek terms: logos, ethos, and pathos. Allow me to explain how these three principles of persuasion can be appropriately utilized in legitimate attempts to influence others.

Whether in speech or in writing, a person must ground his or her case in solid reason. There should be a coherence that runs through the entire position. The organization of the presentation should reflect a logical order and specific arguments should be well supported with rich evidence, facts, and reasons. Logic can be defined as “ordered thought;” so fallacious forms of reasoning must be avoided altogether.

Logical appeal alone may not persuade all people but its absence will certainly persuade none.

2.      Ethos: Persuasion based upon Character

Now, having laid the rational order discussed above, it is important to add credibility to it. An intellectual code of conduct should be demonstrated by handling competing positions with accuracy and fairness. Maintaining a respectful tone and avoiding inflammatory language is critical. Appealing to the most reliable and credible sources in supporting a position also helps establish authority—and candidly identifying a position’s possible weaknesses also exhibits a refreshing intellectual honesty.

While logic and moral creditability carry great weight in terms of persuasion, people must continue to care deeply about the issue being presented.

3.      Pathos: Persuasion based upon Emotion

Just as human beings are rational creatures so, too, are they emotional creatures. This appeal to the passions seeks to illustrate just why the reader or listener should care about the topic or argument being presented. Good writers and speakers often utilize vivid imagery (use of metaphors, storytelling, etc.) in order to provoke feeling and thus awaken the emotions. Appealing to the deep shared values or beliefs of an audience can also serve to ground persuasion. However, manipulative emotional appeals can clearly turn people off and thus spoil the deal.

A noble rhetorical appeal that seeks to persuade through the genuine use of logic, authority, and an arousing of the passions is very powerful and useful. Christians who care about persuading people of the truth for the right reasons should give Aristotle’s discussion of rhetoric a careful hearing.

I’ll revisit the use of rhetoric in a Christian context in January.